Movie reviews: 'Alita: Battle Angel' is a CGI spectacle with a synthetic heart 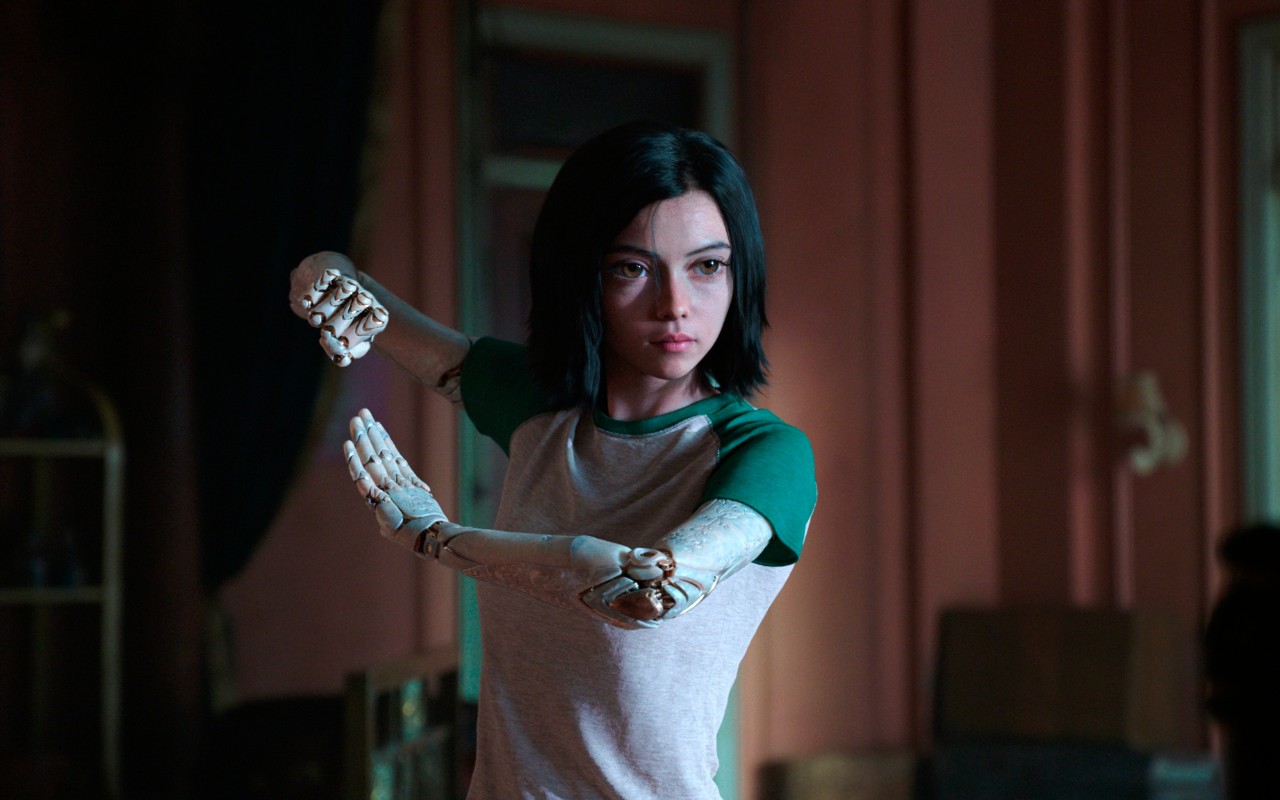 The character Alita, voiced by Rosa Salazar, in a scene from 'Alita: Battle Angel.' (Twentieth Century Fox via AP)

There ain't nothin' in the world like a big eyed girl to make Christoph Waltz act so funny. Five years ago he played Walter Keane, the wannabe artist who wrongly took credit for his wife Margaret's phenomenally successful paintings of sad looking kids with enormous eyes. He returns to screens this weekend as a mentor to a cyborg heroine who looks like she stepped out of one of Keane's paintings.

Set in 2563, three hundred years after "the fall," a deadly war, the story takes place in the dangerous and dystopian Iron City. Overcrowded and violent, the city doesn't even have police, just Hunter Warriors who track down criminals for cash.

The action kicks off when the kind-hearted cybersurgeon Dr. Dyson Ido (Waltz) finds the cast-off "core" of Alita (Rosa Salazar), an abandoned cyborg with amnesia, discarded in a scrapyard. "I guess I'm an insignificant girl," she says later, "thrown out with the rest of the garbage."

Recognizing that there is more to her than metal and wiring, he takes her in, and like a high tech Dr. Frankenstein pieces together a body for her abandoned head and shoulders. He cares for her as if she was his daughter, attempting to give her a normal life despite the fact that there is very little normal about her. Sure, she giggles like a teenage girl and develops a love-at-first-sight crush on Hugo (Keean Johnson), but strange flickers of memory keep popping into her head. 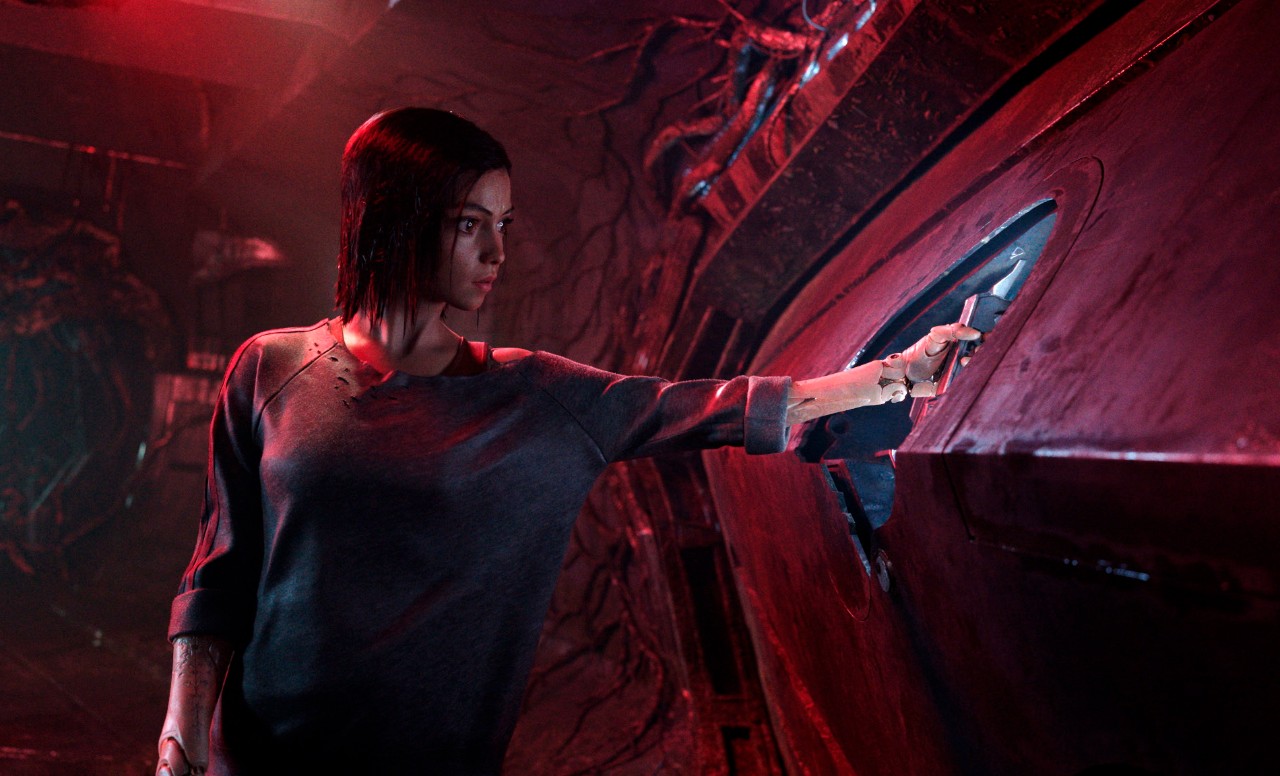 The character Alita in a scene from 'Alita: Battle Angel.' (Twentieth Century Fox via AP)

Fragments of her former life come back when she least expects it. When she rescues a dog from danger an old instinct kicks in and she shows remarkable agility and speed. Later, when Hugo teaches her to play Motorball — sort of parkour on rollerblades — she displays incredible skill.

Turns out triggered recollections of her warrior past provide clues to who she once was. As her true identity emerges — turns out she is one of the most advanced cyborg weapons ever made — sinister forces in Iron City including Motorball impresario Vector (Mahershala Ali) and the world-weary Chiren (Jennifer Connelly), want her stopped. At stake is not just her survival, but the survival of Iron City, and everyone in it. "I do not stand by in the presence of evil," she says.

Loosely based on Yukito Kishiro's original manga, with a focus on the first four books, "Alita: Battle Angel" provides director Robert Rodriguez with lots of material for world building. Perhaps too much. Each main character has a backstory, whether it is in Iron City or the Eden-like floating world of Zalem. There's hundreds of years of history to establish, the rules to Motorball and, of course, the blending of Alita's two lives, past and present. There's a lot going on. Exposition abounds and with the frenzy of plot it is inevitable there will be shards of unanswered and unexplored questions left by the time the end credits roll. Add to that a cliffhanger ending that doesn't feel like an ending, more like Rodriguez simply ran out of film, and you have a movie more concerned with its franchise possibilities than telling a complete story.
"Alita: Battle Angel" is a feast of imaginative CGI, driven by large scale spectacle but, like its main character, has a synthetic heart. 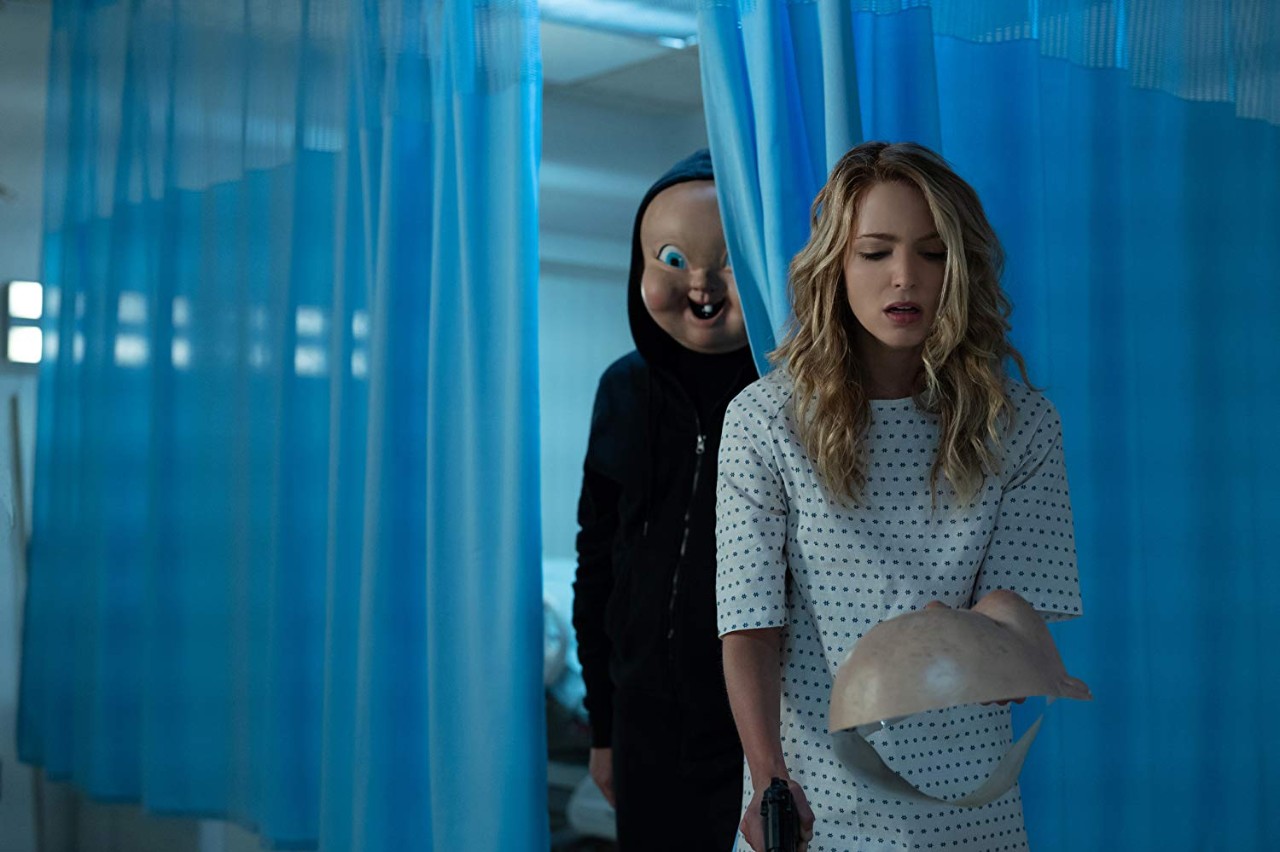 Let's do the time warp again!

When we last saw Tree Gelbman (Jessica Rothe) she was a sharp-tongued Bayfield University student trapped in a time loop, forced to relive the day of her death again and again. As the main character of "Happy Death Day" she died, over and over again, while blossoming spiritually and all the while trying to figure out who her masked killer was.

In the beginning of the sequel, "Happy Death Day 2U," Tree is back to normal. The "Groundhog Day" style murder and mayhem has stopped and she's an everyday student who no longer has to live (and die) in fear. 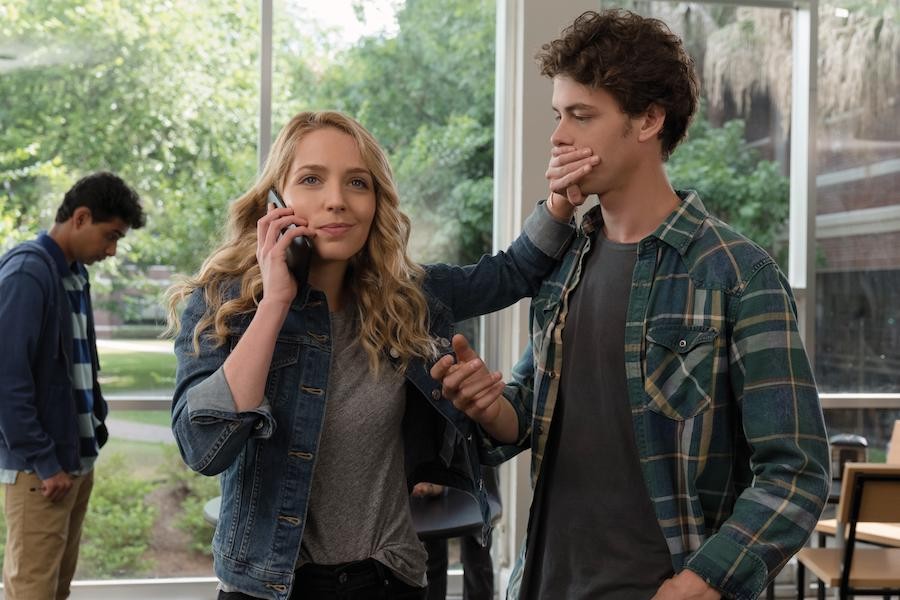 At least that's how it starts. Tree wakes up one morning to discover she's back in the deadly twilight zone. This time is different, however. The loop seems to be caused by a time machine built by Ryan (Phil Vu), roommate to Tree's inter-dimensional boyfriend Carter (Israel Broussard). How does it work? Imagine a piece of paper folded into six equal squares and punch a hole through the middle. Unfold it. Six squares, six identical holes. That's the multi-verse, Tree is the hole amid duplicate realities separated only by space and time.

The new loop sees Carter dating ultimate mean girl Danielle (an underused Rachel Matthews) and Tree's deadly roommate Lori (Ruby Modine), now alive and no longer evil. The creepy killer is back, but so is Tree's late mother. "People say 'I love you' all the time," Tree says, "but it was until you can't say it to their face but you missed it." Despite the masked killer mayhem Tree wants to stay stuck in the loop and foster a relationship with her mother, a situation that provides challenges for everyone. "I thought I could have it all but I couldn't," she says. 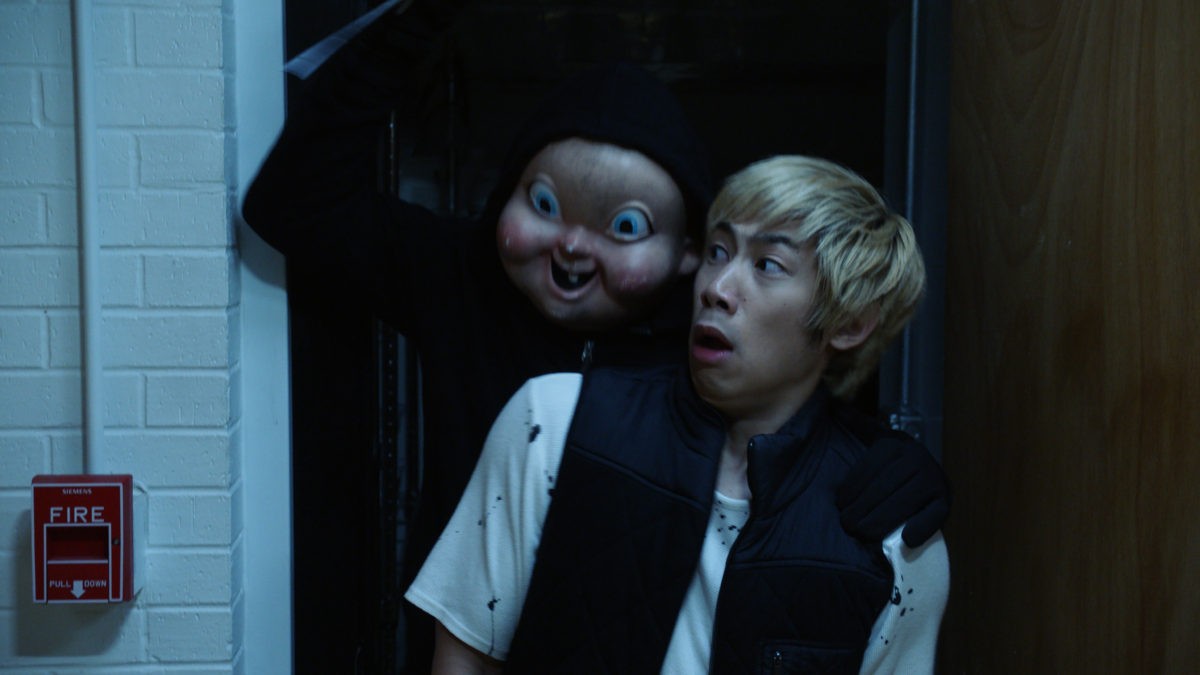 There are some movies where a sequel seems inevitable. They are stories that need a few extra acts to expand already interesting ideas. And then there is "Happy Death Day." The original was a tight slice of fantasy that mixed horror with humour to form a charming, complete package. The sequel takes the premise and the appealing actors from the first one and wastes them in an unnecessary follow-up that will only work if you've seen the original. Convoluted and not nearly as laugh-out-loud funny or as tense as the 2017 film, it zips along at the speed of light, piling twist on top of twist.
The idea of a multi-verse so articulately expressed in "Spider-Man: Into the Spider-Verse" is messy and drawn-out here, dumbed down to simple repetition rather than richly imagined varied splinters of the main story.

It's a shame because the core cast, Rothe, Broussard and Vu, all have faces John Hughes would have loved and work hard to make sense of a story that meanders through time. At best "Happy Death Day 2U" makes you wish you could go back in time to experience the sugar rush of the first film again for the first time. 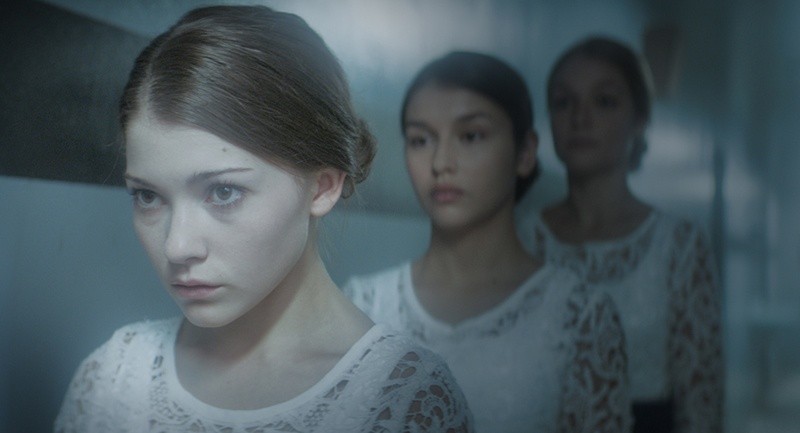 A mix-and-match of "The Handmaid's Tale" and any number of dystopian young adults tales, "Level 16" is a powerful statement on the expectations levelled at young women.

The Vestalis Academy is a drab training centre where any deviation from the lesson plans of female virtue — cleanliness, obedience, humility and patience — gets students labelled "unclean" and results in a trip "downstairs" for severe punishment.
The kind of prep school that provides well-trained "daughters" to the highest bidder, its teachers educate on grooming, hygiene and life lessons like, "curiosity is the first vice," and how to dress like the daughter of a top society family.

It's also the only home its students have ever known. "When a girl is obedient and sweet the world cannot help but love her," says Dr. Miro (Peter Outerbridge). "Follow the rules. Be patient. Let us take care of you. " 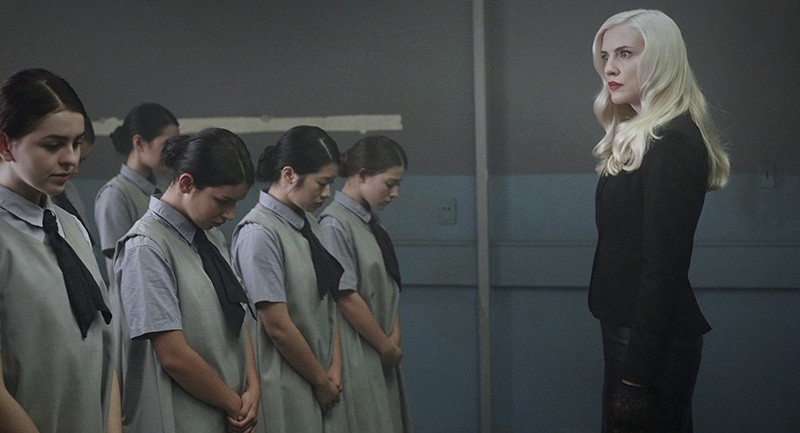 Each year is a level. "Level 16 is not like the other levels," lectures the stern head mistress Miss Brixil (Sarah Canning). "All your training has lead up to this moment. Soon our sponsors will arrive to choose their new adopted daughters." Interestingly, what the schooling doesn't include are life skills like reading and writing.

The story focuses on Vivien (Katie Douglas) and Sophia (Celina Martin), two students who stop taking the "vitamins" that put them into a coma-like sleep every night. Working together they hatch a plan to save themselves and the others from a hideous fate.

Director Danishka Esterhazy's "Level 16" details how so-called traditional feminine values can actually be tools of oppression. It's a powerful message coupled with thoughts on objectification that pays off with a tense and horrifying climax that feels earned by the preceding story. (NO SPOILERS HERE!)

Esterhazy's colour palate of grey, grey and more grey enhances the institutional nature of the story, helping to create the bleak atmosphere surrounding the students, most of whom find out the hard way that following the rules isn't always the best path.
Mixing elements of social justice, horror and sci fi, "Level 16" is a genre movie that delivers both intellectually and emotionally. 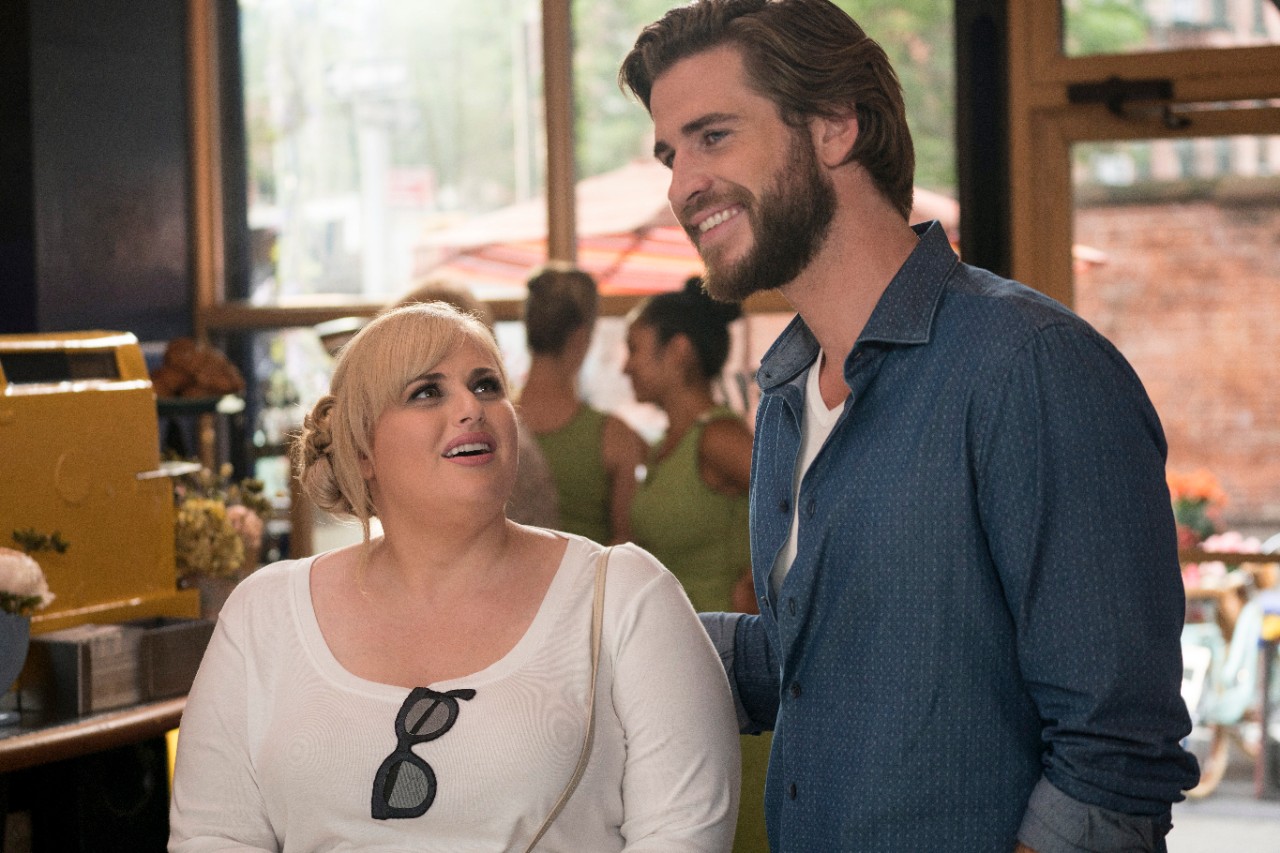 Rebel Wilson and Liam Hemsworth in a scene from 'Isn't It Romantic.' (Michael Parmelee / Warner Bros. Pictures via AP)

To prepare for the new comedy "Isn't It Romantic" director Todd Strauss-Schulson studied 65 rom-coms day and night for two weeks. The intensive study helped him form the basis of his movie, the meta tale of a woman, played by Australian comedian Rebel Wilson, who recovers from a hit on the head to find herself trapped inside her least favourite kind of film, a romantic comedy.

The second "bonk on the head" movie of the season — following Taraji P. Henson's "What Men Want" — sees Wilson play Natalie — "Nat," she says, "like the bug." — an Australian architect living in the world's greatest rom-com town New York. As a young girl she loved the movie "Pretty Woman" but became cynical about love after her mother scolded, "Life is not a fairy tale. People like us don't get that. Take a look in the mirror doll. We're not Julia Roberts." Closed off and shut down she has a tough time finding love until an attempted robbery in the subway leaves to the proverbial knock on the noggin. 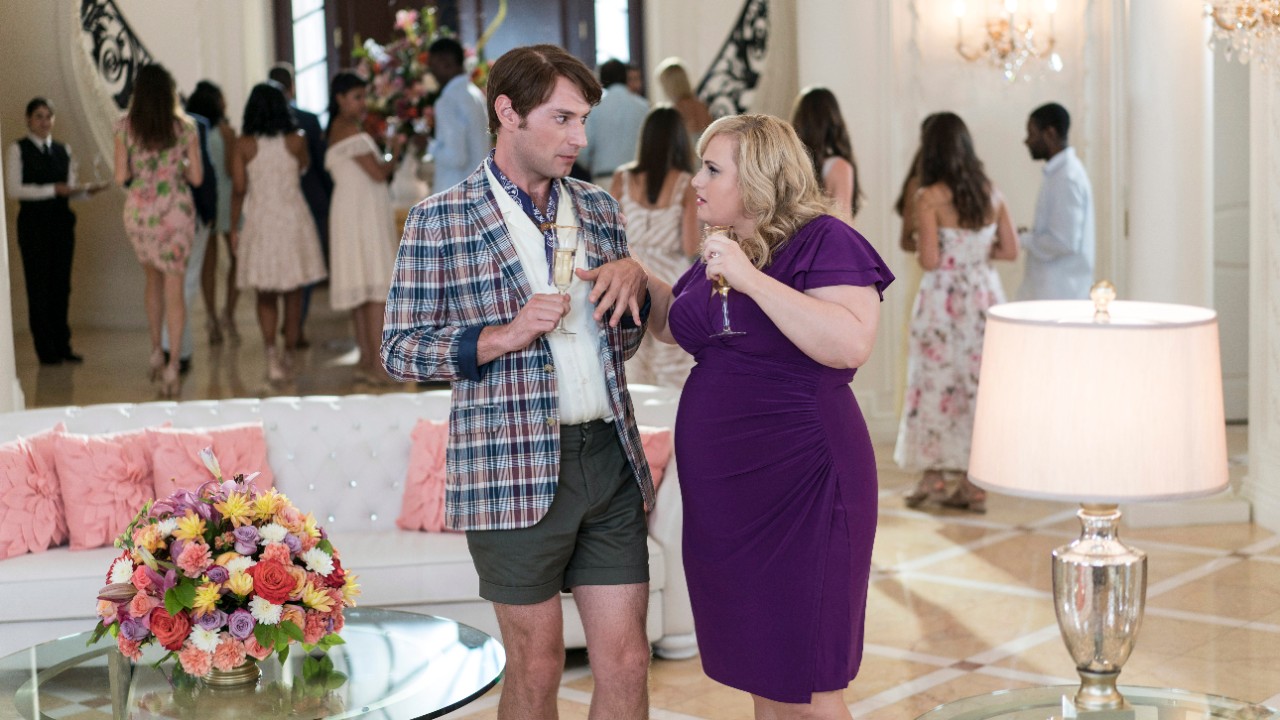 Brandon Scott Jones and Rebel Wilson in a scene from 'Isn't It Romantic.' (Warner Bros. Pictures via AP)

When she wakes up she finds herself in Hallmark style romantic comedy — "It looks like somebody put a beauty filter across New York City." — complete with a palatial apartment, a "clichéd gay sidekick," champagne and, of course, handsome men who look her in the eye. "My life's become a m***********g romantic comedy," she shouts, standing in front of the Bethesda Fountain in Central Park, as dancers swirl around her. "It's like The Matrix for lonely women."

Is she trapped forever or is a love affair the way back?

"Isn't it Romantic" is simultaneously a satire of the films Natalie hates and one of the movies Natalie hates. Both ingenious and predictable, it is enjoyable and a little tedious. Essentially Strauss-Schulson has taken all the most predictable rom com clichés and book-ended them with some bonk-on-the-head fantasy. The machinations we're used to are all on display but instead of poking fun the film absorbs them become a pale imitation of the thing it professes to mock. 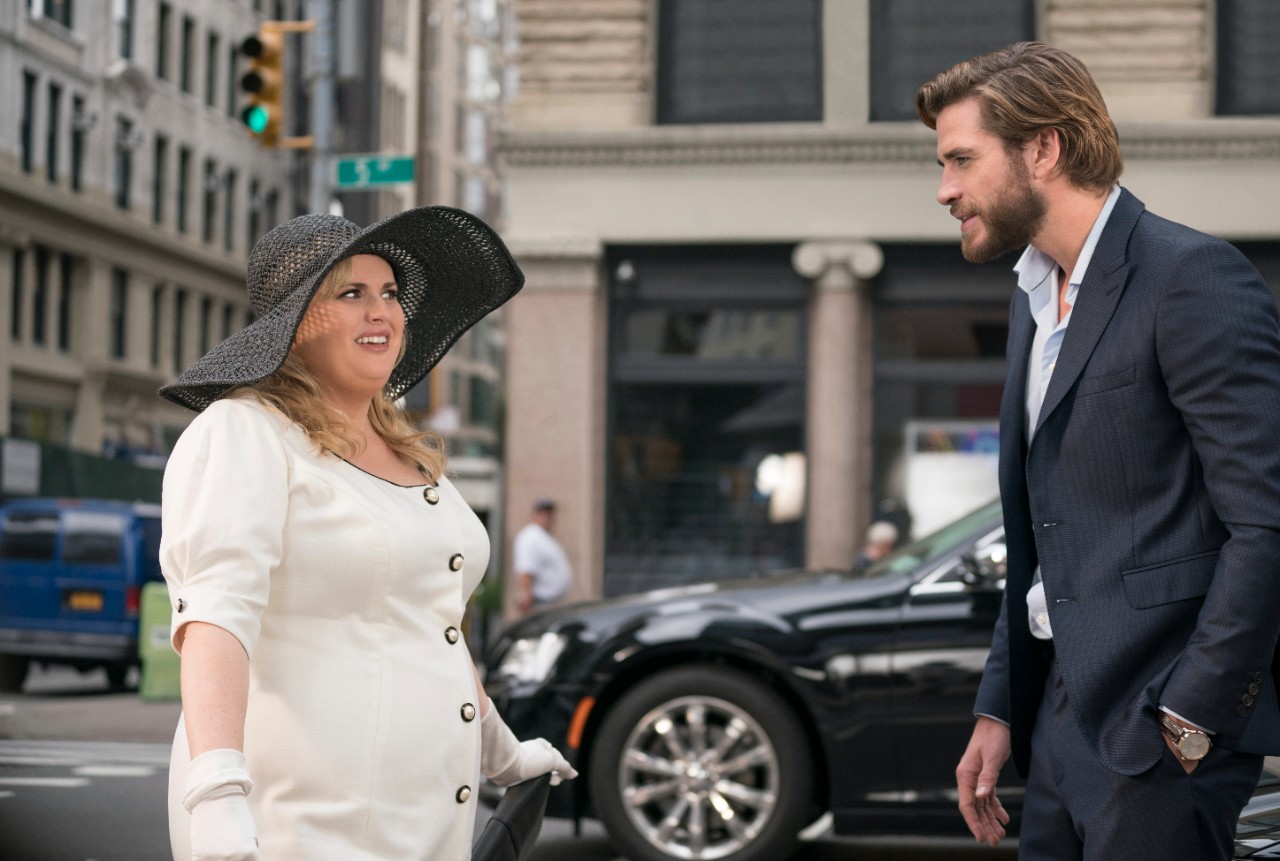 Rebel Wilson and Liam Hemsworth in a scene from 'Isn't It Romantic.' (Michael Parmelee / Warner Bros. Pictures via AP)

Wilson gamely plays along. She's funny when she's cynical a little less so when she's in rom com mode but either way she brings the fun. Her character's messages of being happy with the other things in life other than a man are potent until they are blunted later on, but Wilson maintains good-humoured empowerment throughout.

The supporting cast mostly play it straight except for Liam Hemsworth — Miley's husband, not Thor — and Betty Gilpin as Natalie's rom com obsessed assistant. Both are rom com ready, with a twist.

I'm guessing "Isn't it Romantic" was meant to be a comedy about romance but falls prey to the usual pitfalls of the genre.

Read another take: Learning to love the rom-com in 'Isn't It Romantic' 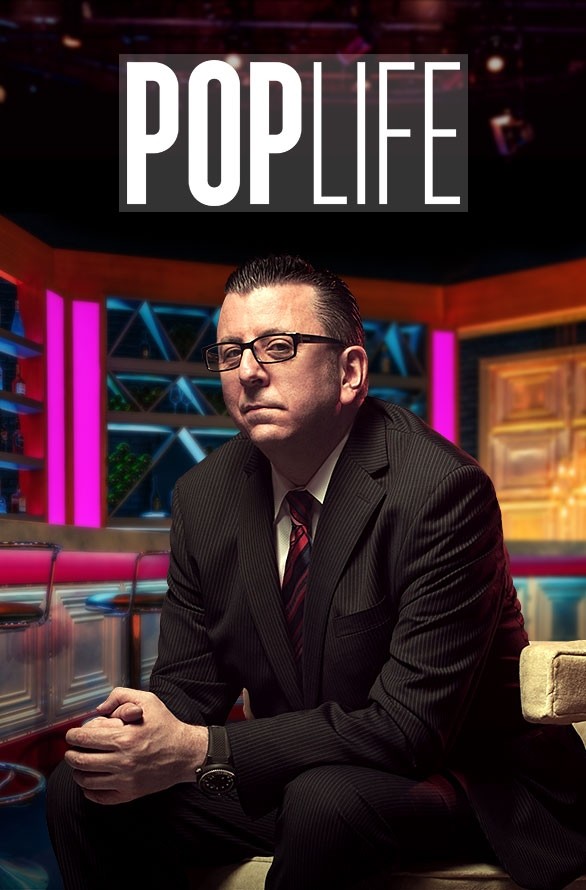